The ATLAS / STUDIES project consists in ten short pieces concerned with the body and its representations, resonating with our times. The question at the heart of this work: What stories can bodies, dance and choreography tell, and how can we perform these in ten different ways?

These short dance pieces (maximum 20 minutes each) are independent and can be performed separately. But all are linked through form, inspired by the study such as one finds in painting or music, as well as through content about body representation, energy, modern myths in the world of today.
They function like snapshots, travelling between abstraction and narrative fragments. Together, they form a “choreographic atlas” of contemporary bodies and the stories they tell.
Michèle Murray 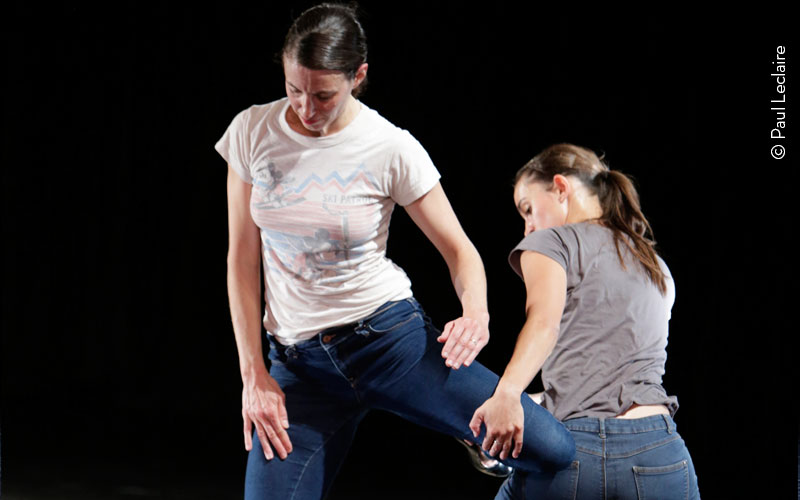 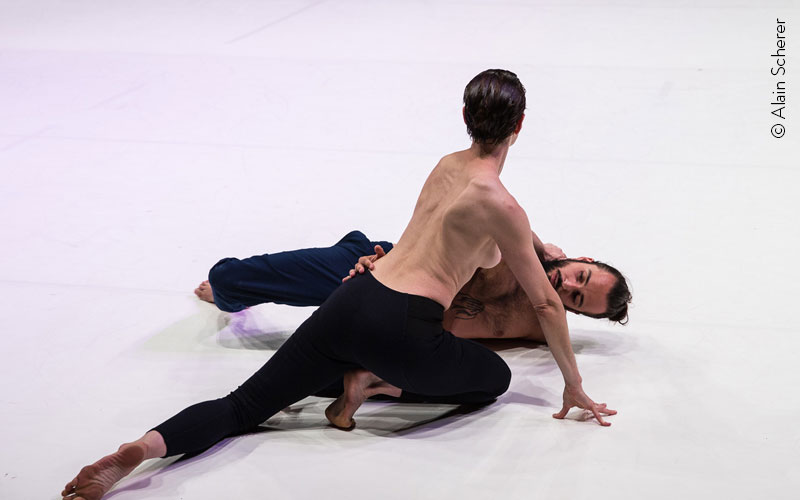 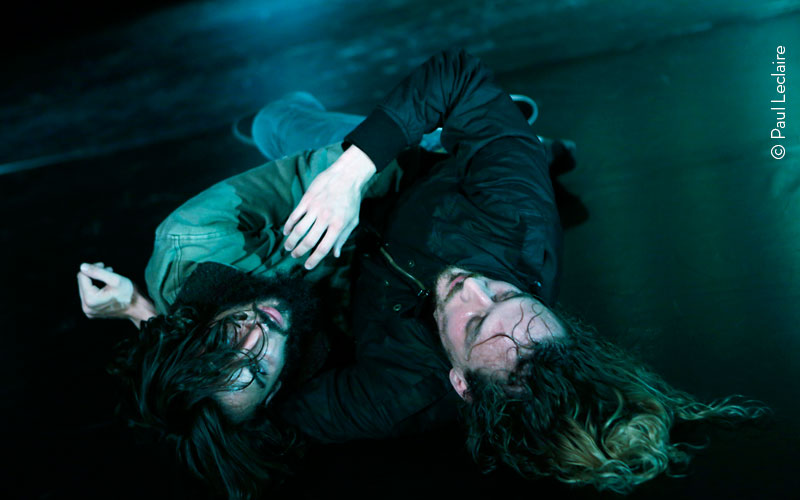 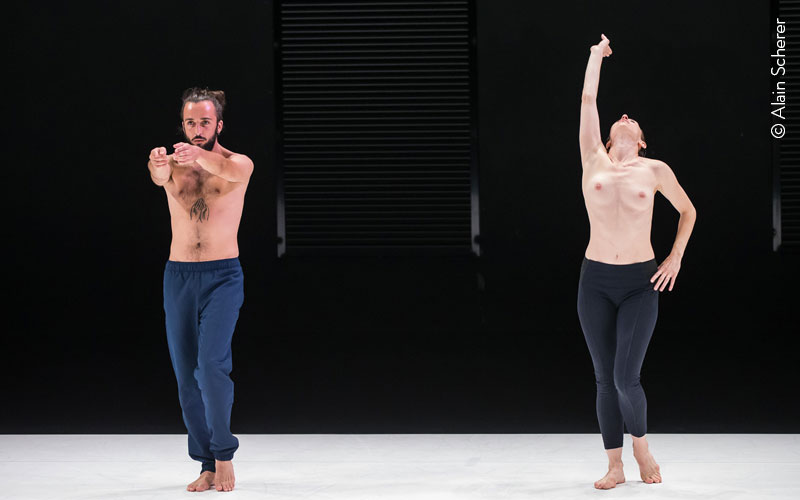 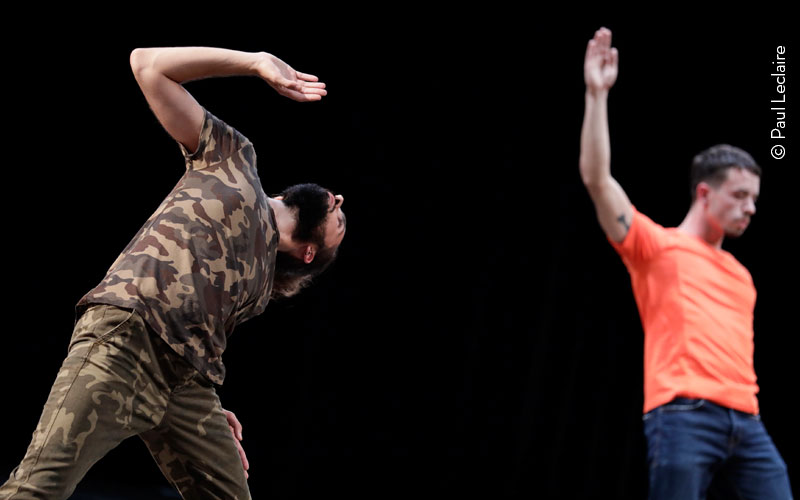 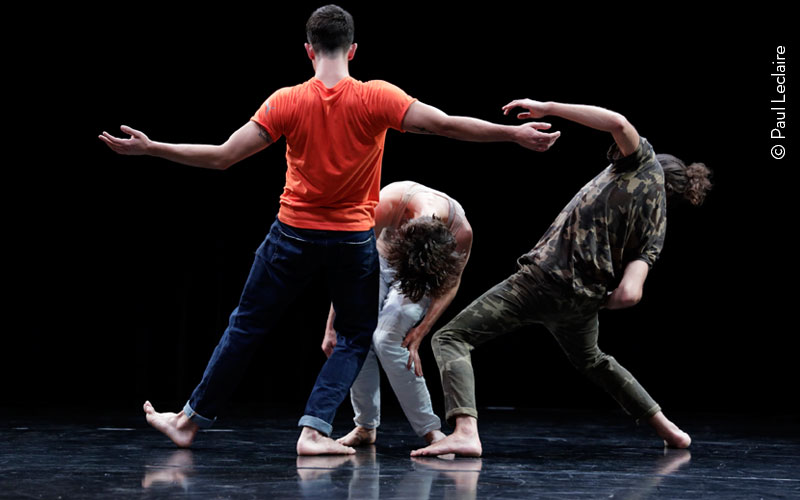 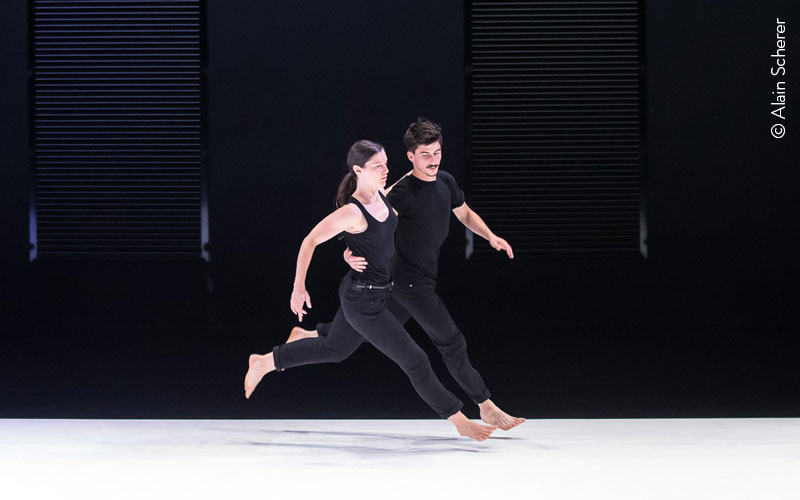 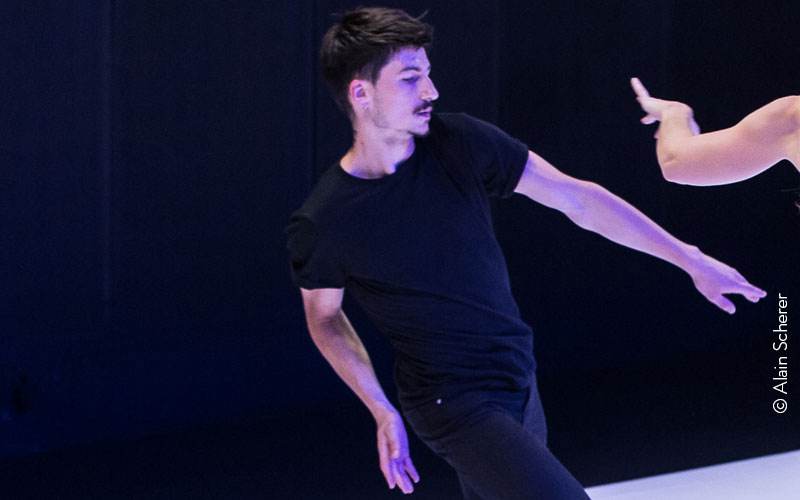 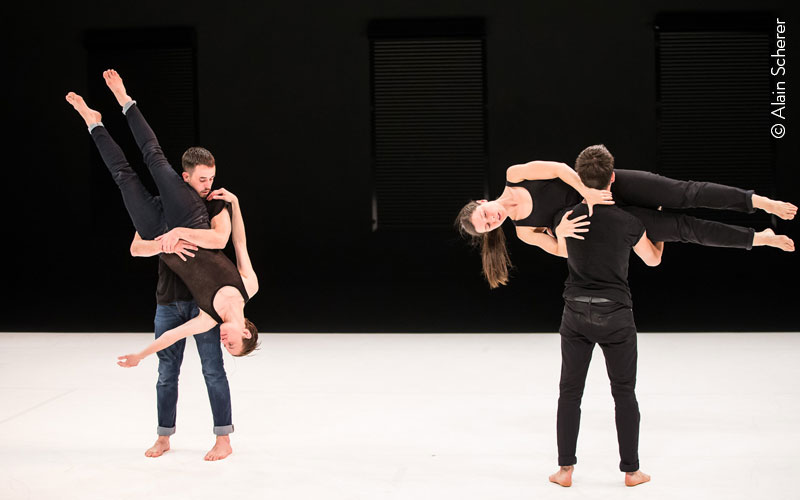 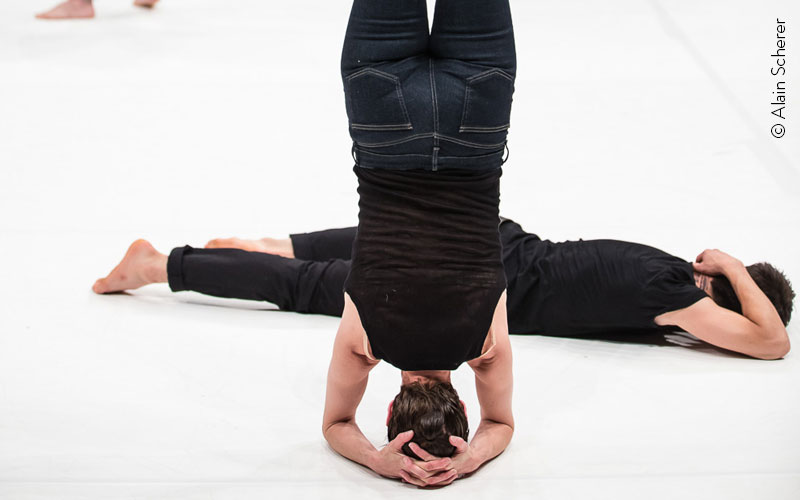 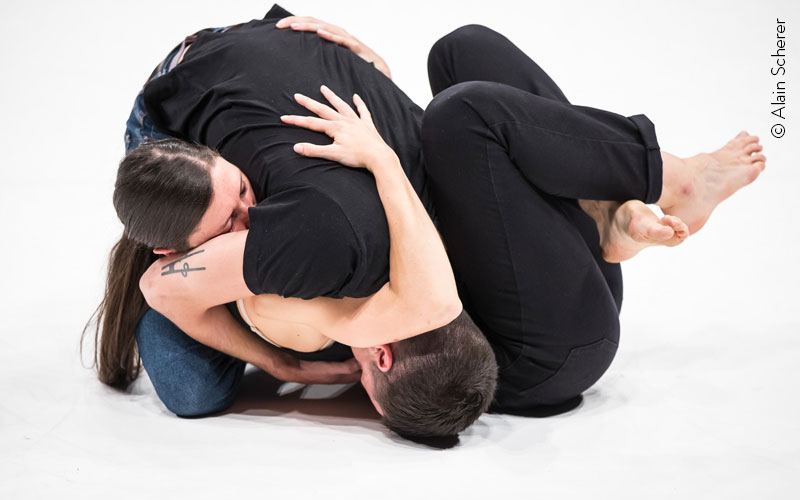 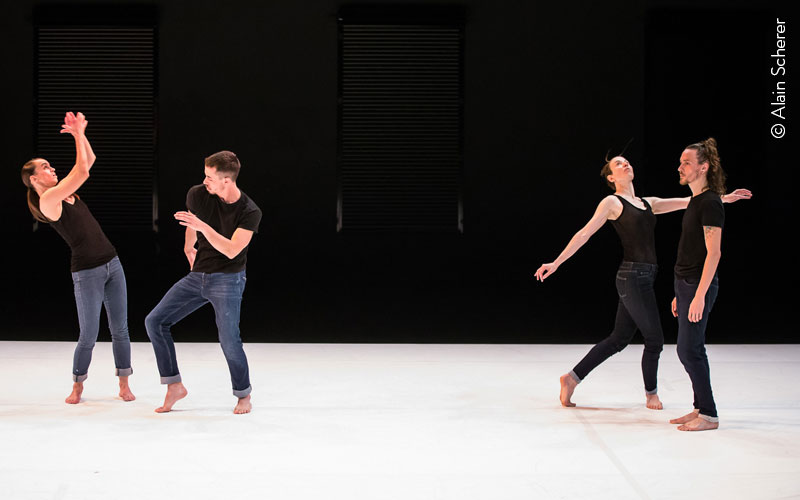 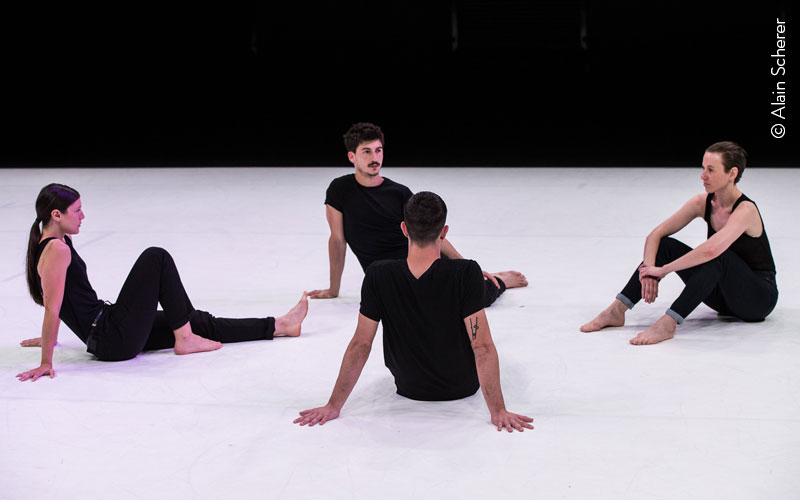 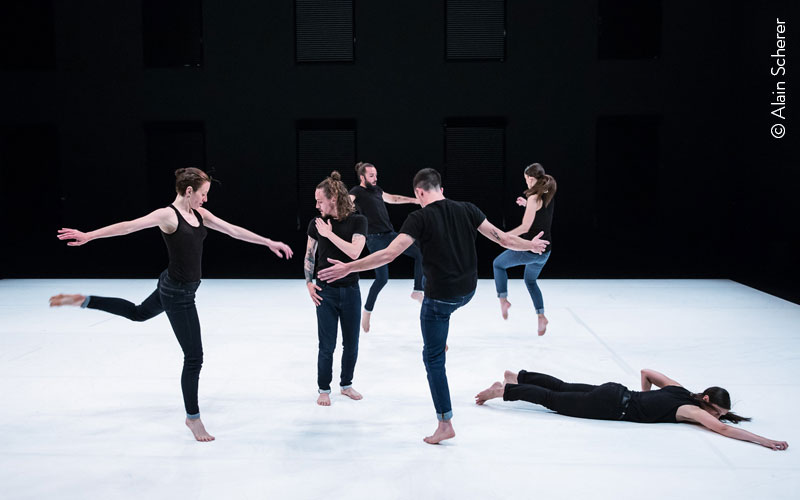 Gérard Mayen / Danser Canal Historique / June 2018 /: Seen on Wednesday 27 June (in two parts) at the Studio Bagouet as part of the 38th Montpellier Dance Festival -“ATLAS / STUDIES” by Michèle Murray. Along with a beautiful cast and set in an ideal location, the choreographer composes an atlas of knowledge and mischief in touch with the zeitgeist.
Nothing ordinary ever happens in the Bagouet dance studio of the National Choreographic Center in Montpellier. Designed in its time by the choreographer Dominique Bagouet, who gave it its name, this theater is the perfect architectural space for dance, in which the audience is included. It’s incredibly stable, vast and calm. Yet at the same time, it seems full of possibilities.
One could not have dreamt of a more appropriate setting for the idea that Michèle Murray works with in her choreography ATLAS / STUDIES, created for the Festival Montpellier Dance Festival (38th edition). Ten studies are performed in two separate series on the same day, each study with its own duration (none lasting longer than twenty minutes) and with a cast of seven performers dancing in different combinations for each study. This means a vast palette in the number of performers on stage (ranging from duets to septets) and genres. It’s a little like a card game which is continually being reshuffled. The very short interludes between studies are clearly marked by the stage being completely emptied ( left with only Catherine Noden’s rough and velvety black lights). At the start of each study, the protagonists step onto the stage and take a firm place, often in a quiet frontal and central position. From this point on, movement variations begin and develop through procedures of contamination or proliferation. This commitment to things is an event in itself (…)

(…)Following the principle of inventive relaunch with each new study, the performance is often captivating, at times exhilarating. Each study is an opportunity for reshuffling the cards, constantly rethinking and reimagining new combinations, interrelational modes, observational skills and sharing of energy levels. Something is happening(…)
This particular quality as well as the dancers’ very powerful presence on stage creates excitement und suspense. There is always something at stake when there is suspense. It is quite impossible to recount the abundance of motifs, situations, and techniques performed by these dancers. A playful intelligence emanates from this composition, as well as giving us the opportunity to enjoy the very different physical and moral personalities on stage. One could say that powerful choreographic personalities make their mark on these games that are not entirely without theatricality.
The choreographer claims to have searched for the “mental state of the performer”, where feeling is more important than iterating. The dancers must “incarnate” and not “play -act”. The improvisation practiced it in almost all studies requires this mental state. This goal has also been achieved with an agreeable suspense. In these studies, one finds the essence of our current zeitgeist in a contemporary performance. And we thus often hold our breath.

Lise OTT, Montpellier Dance / June 2018 / How do bodies tell the story of our times? How do they resonate with the world? The fundamental questions Michèle Murray asks in ATLAS / STUDIES are also questions of dance and territory, memory and mythology. The French – American choreographer who trained in ballet in Düsseldorf and contemporary dance in New York with Merce Cunningham, and who is now based in Montpellier, has decided to combine the demands of her abstract and narrative choreography with a reexamination of current dance forms. In 2012, she founds PLAY, a dance company open to other modes of artistic expression while creating projects concerned with the body, with movement and with choreography. This company defines the framework of her research. Guided by the inspiration of the “Mnemosyne” atlas, a collection of images by art historian Aby Warburg, she developed the concept of a personal choreographic atlas consisting in ten short pieces – the last three choreographed especially for Montpellier Danse. As independent pieces coexisting with various musical compositions, including those of Gerome Nox, they are the result of a rigorous and inventive improvisation process, capable of reshuffling the cards of modernity and emancipating themselves from any academism. Pieces to live through and experience, they draw the atlas of a choreographer engaged in a never-before-seen marathon of pure dance. They are full of energy and joy.